Can AAV be used in vivo?

Yes, AAV is suitable for in vivo injections. The appropriate AAV serotype should be used for expression in the tissue of interest and should be injected directly into that tissue. As an effective vector for delivering exogenous genes, rAAV has been used by an increasing number of animal researchers. However, variables such as the ideal injection site, quantity of rAAV vector injection, and incubation period varies across expiriments. Due to the differences in scientific fields and animal models, it is difficult to adopt a universal AAV injection method that is applicable to all experiments. Clients must therefore explore these variable independently based on their specific goals.

The first experimental use of rAAV delivered a neomycin-resistance gene into mammalian cells, thus demonstrating that AAV can be used to drive exogenous protein expression in mammalian cells. Since early proof of concept work rAAV have continuously been used as a gene transfer tool for biological research.

Over-expressing a gene of interest in mammalian cells via rAAV has a several unique advantages over alternative viral systems. For example, rAAV infection does not result in a significant host immune response that is associated with alternative virus based genetic payload delivery systems including adenovirus and lentivirus. rAAV can achieve also long-term expression without genome integration in vivo, whereas the use of lentiviruses may raise concerns associated with genome integration. Furthermore, rAAV serotypes exhibit varying degrees of tissue tropism that provide a mechanism for tissue specific infection that cannot be achieved using a lentiviral approach. This tissue tropism not only provides a mean of specificity, but also allows AAV to transfer target genes into almost all animal tissues with considerations of different serotypes and promoter-specificity.

Under normal conditions the over expression of a transgene by rAAV occurs through a multistage process in which (1) single-stranded the AAV vector genome enters the host cell nucleus, (2) the AAV genome is converted to a double stranded circular episome via second strand synthesis, and (3) episomes are converted to high molecular weight concatemers that provide an substrate for long-term expression of the transgene. It was found that synthesis of a second strand is the rate limiting step in this process, and in an effort to bypass this step McCarty and colleagues developed the double-stranded (self-complementary) AAV (dsAAV). dsAAV house a modified ITR that cannot be cut by the Rep protein, and thus the self-complementary single stranded DNA can form the double-stranded DNA [1]. Based on this advancement, we generated “K” serial ssAAV entry vectors with 14 kinds of promoters for targeting universal or specific organs or cell types, and “KD” serial dsAAV (scAAV) with 12 kinds of promoter to drive customized genes.

rAAV can also be used to drive gene activation with CRISPR based technologies. The CRISPR system has be modified to act as a gene-activation system in two ways. First, a cutting deficient mutant of Cas9 called dCas9 can be used in place of Cas9. dCas9 is capable of binding to the host genome by the same binding mechanism as Cas9, but is not capable of cutting the DNA and instead remains bound. dCas9 can be fused with a transcription activator, like VP64, or coupled with a modified sgRNA that forms sgRNA loops capable of recruiting transcriptions factors such as MS2-P65-HSF1. Recruitment of transcription elements can thereby drive transcription of a target gene. Alternatively, short gRNAs that prevent uncoupling of Cas9/dCas9 from cutting or uncoupling from the host DNA after binding the target sequence. Modified MS2-binding sgRNA loops then recruit the MS2-P65-HSF1 activation component, which will make it possible to apply wild-type Cas9 for simultaneous activation and knock-out by delivering both a short and a standard length gRNA that are targeted at different genes. PackGene offers our E series SpCas9-specific activation vector for gene activation including when paired with our A series SpCas9 vector or a SpCas9 mouse. In addition, vector lines for SaCas9 gene activation are coming soon and will provide more promoter choices for both SaCas9 and MS2-P65-HSF1.

RNA interference (RNAi) is a highly specific tool for protein knockdown in which via small non-coding RNA bind to target a proteins mRNA to drive mRNA degradation and therefore reduce protein translation. RNAi mechanisms are endogenously present in most eukaryotes, and have been widely adopted as a molecular tool for gene function studies, drug discovery, and gene silencing therapy. rAAV can be used to drive the expression of RNAi, and PackGene’s M series of vectors serve as an exceptional resource for driving RNAi expression. Our M series of vector are designed to express short-hairpin RNAi under the H1 or U6 promoters whole simultaneously expressing an EGFP, mCherry, or Firefly-Luciferase reporter protein for easyt identification of transfected cells.

We offer multiple serotypes to meet your research needs, and strive to achieve rapid turnaround and affordable prices while maintaining the highest quality. We are committed to delivering AAVs at guaranteed quantities and within the quoted project lead time. In a case where our quantity and efficiency guarantee is not met, we will refund 5% of the total order cost as an account credit that may be applied to your next order. 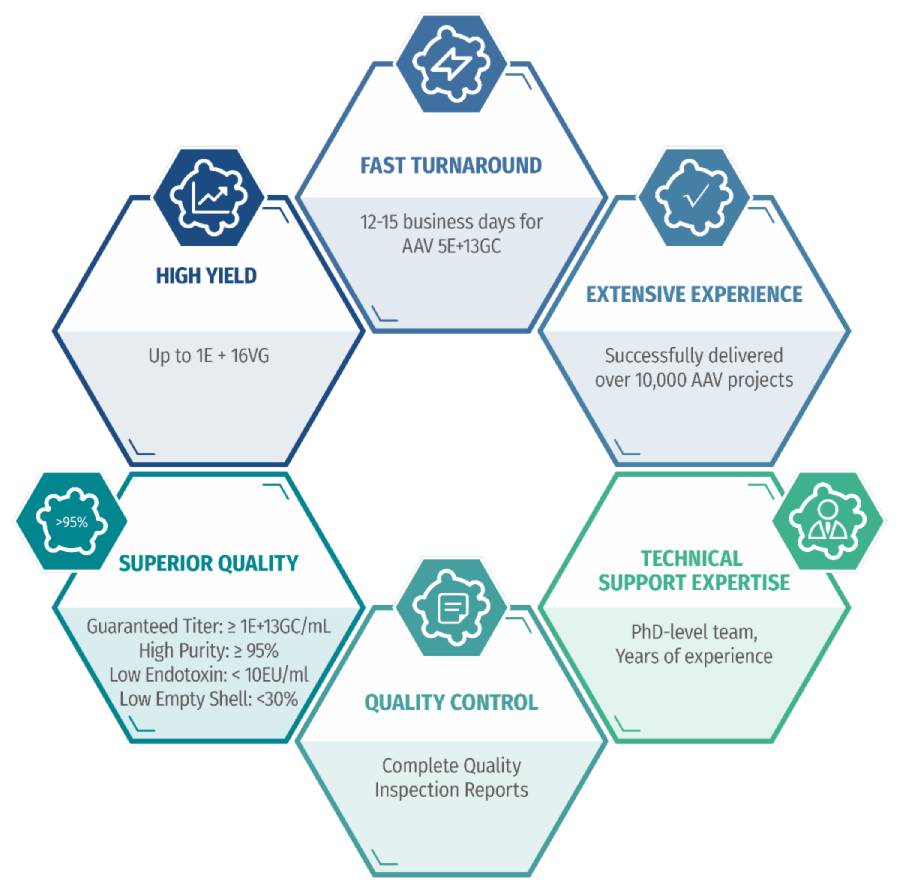